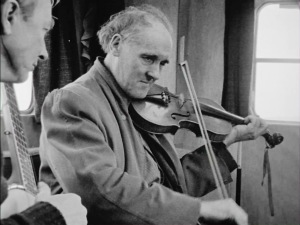 In 1964 Pete Seeger travelled with his family to the remote Bluestacks mountains of Co. Donegal to spend a single day in the company of elusive folk music legend John Doherty. Now, 50 years on, in The Long Road to Glenties, a presentation by Danny Diamond and Conor Caldwell, archival film footage of the meeting is revealed for the first time.

By the early 1960s the folk singer and music collector Pete Seeger (1919-2014) was a figurehead of the folk revival in America, known and respected as a performer, song writer and civil rights activist . After a 25-year musical career dogged by political persecution, he had emerged as a hero to a new generation who shared his interest in folk music and progressive politics.

Buoyed by newfound success, Pete and his family embarked upon a year-long world tour in 1963/64. As part of the tour the Seegers visited Ireland, where they met up with some of the brightest stars of the Irish folk music scene at the time. But the Seegers had another reason for their Irish adventure, and in May 1964 they traveled to rural southwest Donegal in search of an altogether different individual. 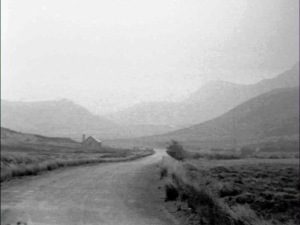 The fiddle player John Doherty (1900-1980) was passing his time as an itinerant tinsmith and pedlar along the ‘mountainy’ paths and byways, traveling from house to house and playing a form of traditional music of which he was one of the last custodians. His music was reflective of that of a time before radios or dance halls, when a fiddle was hung in every house in southwest Donegal, and music making was considered the privilege of every man, woman and child. Learning from his parents, uncles, brothers before carefully studying recordings of other Irish musicians when they began to circulate in the 1920s, Doherty developed a dynamic approach to fiddle playing which has assured him a place among the greats of the Irish tradition.

Meeting in a caravan just outside the market town of Glenties, the Seegers spent a day filming and interviewing Doherty with the help of his friend and patron Malachy McCloskey and the English folk-music collector Peter Kennedy. This film footage is a lasting memorial to the unique bond formed between two musical figures who came from such different worlds, yet had so much in common.

With thanks to the Seeger family, The Library of Congress and The Irish Traditional Music Archive.